Managerial staff of the Institute: History of the Institute

Astronomical Observatory was established on the 3rd of August (15th of August N.S.), 1871 as a part of Imperial Novorussian University. First, the position of Director was held by Prof. L.F. Berkevich, meteorology and celestial mechanics expert, Head of the Astronomy Department of the University; expeditionary observations of a Mercury transit across the Sun’s disk, as well as a range of other studies were carried out under his directorship.

From 1945 to 1983 the position of Director was held by Prof., Correspondent member of the USSR Academy of Sciences and Honoured Master of Sceinces and Engineering - V.P. Tsesevych. Under his directorship the Observatory built two out-of-town observing stations in Kryzjanivka and Mayaki villages, three high-altitude stations located in Armenia, North Caucasus and Turkmenia; the institution was granted 2nd category scientific institution status, and the number of employees increased from 15 to 150 research scientists. A range of studies was conducted, and prominent findings of fundamental significance and applied relevance were obtained; and the institution was equipped with a number of new telescopes with mirrors of 20-80 cm in diameter, advanced observation devices, etc.

In 1968-1960, the Observatory maintained a leading position in meteor activity survey (owing to Y.N. Kramer), it was charged by the International Astronomical Union with three tasks to study variable stars (carried out by Y.S. Romanov, K.M. Makarenko and O.Y Mandel), etc.

In 1984-1989, the position of Director was held by PhD, Physical & Mathematical Sciences Y.O. Medvedev in 1984-1989, and from 1990 to 2006 - by DSc in Physical and Mathematial Sciences, Prof. V.G. Karetnikov who was the Head of Astronomy Department of the University in the meantime. In 1993, the Observatory was granted the status of the 1st category scientific research institute at the Odesa State University retaining its specific functional-class name as such Astronomical Observatory.

The Observatory staff has been reduced in recent years while the number of employees with the PhD and DSc degrees has increased. Observation processes and determination procedures were computerised. A range of telescopes are operated: ART-3 (Astronomical Reflector Telescope-3) and 60-cm telescope with CDD sensors; new automatic telescopes, such as high-speed KTS and advanced multipurpose telescope OMT-80 at the observing station in Mayaki village; satellite telescope KT-50 with TV CDD camera in Odesa; 80-cm telescope with two-channel electric photometer in Turkmenistan and telescope with 1-m primary mirror, equipped with two-channel electric photometer in Slovakia. A 1-m satellite laser ranging theodolite SLR-1M and 70-cm satellite tracking telescope have been under construction, and modern meteor patrol has been already functioning at the observing station in Kryzhanivka village.

Great gallery (more than 100 thousand) of photographic films with captured night sky images, which is the third largest collection in the world, has been gathered in the second half of the 20th century, and it is a significant contribution of the Observatory as a member of the Virtual Astronomical Observatory of Ukraine. The research library of the Observatory contains more than 200 thousand items.

As early as in the past century Odesa Scientific the Astronomical School was established in SRI AO OSU. Prof. V.P. Tsesevych and Prof. V.G. Karetnikov were the successive principal academic advisers of the School, nowdays it is headed by Prof. S.M. Andrievsky. The studies by SRI AO ONU comprehensively capture a wide range of objects and scientific issues, which the international astronomical community seeks to solve, such as the near-Earth space monitoring, dark energy and dark matter problems, determination of evolution of matter in the Universe in general and in the Galaxy in particular and other related issues.

Historically, the following research lines have been developed: 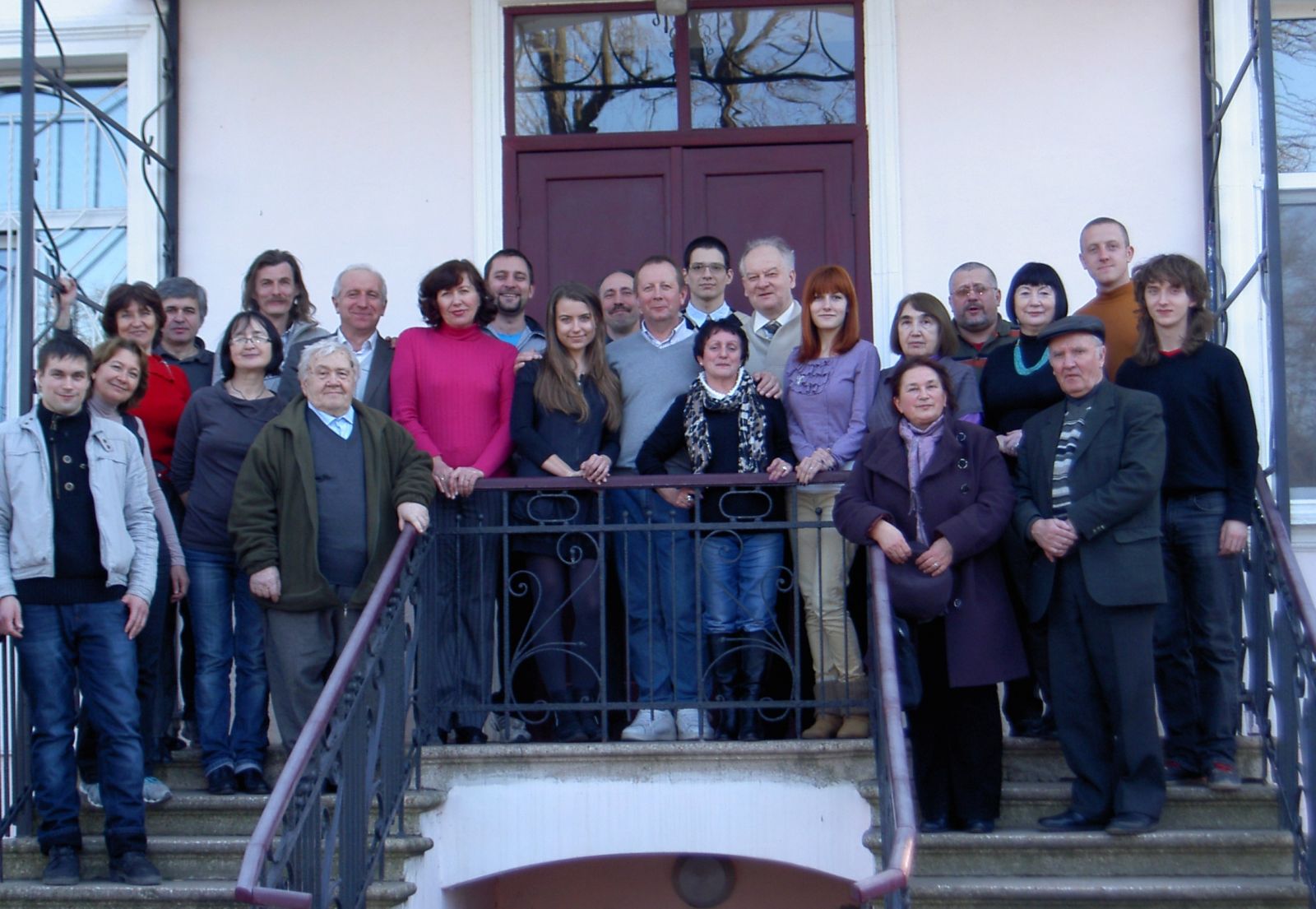 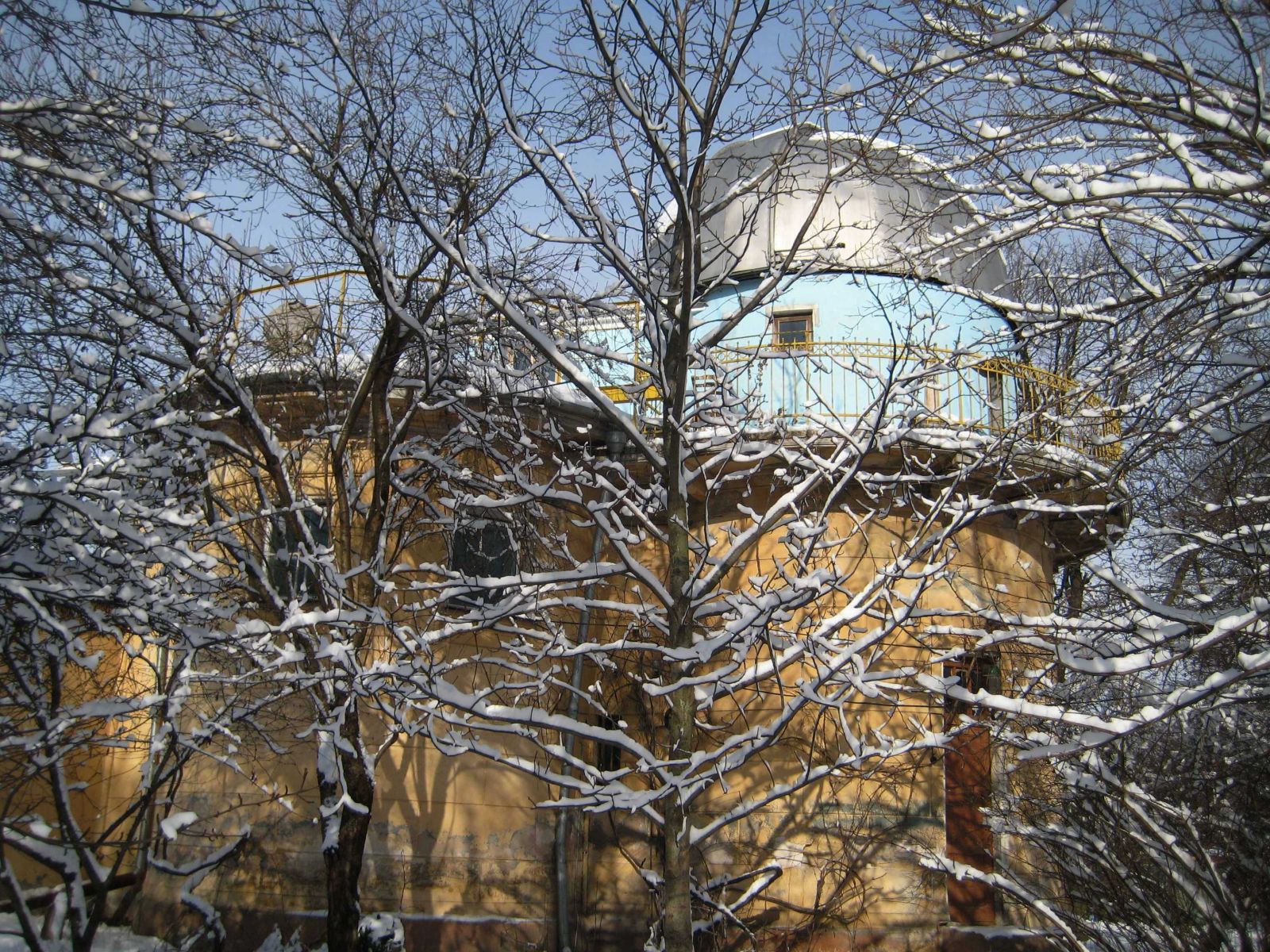 The SRI AO ONU scientists developed their own high-accuracy methods of determination of stellar atmosphere parameters (temperature and luminosity), advanced techniques of investigation of chemical composition of stars; worked out methods of identification of stars’ belonging to different substructures of the Galaxy and confirmed them with the obtained results; developed multilevel atomic models for calcium, potassium, strontium, barium and other elements used to analyse spectra of the first stars in our Galaxy by the procedure that accounts for the departure from Local Thermodynamic Equilibrium conditions (the non-LTE assumption), etc.

Distribution of 25 chemical elements in the Galaxy, from hydrogen to dysprosium, was developed for the first time, and the achieved iron distribution accuracy was higher than ever before. That enabled to define the fine structure in the radial distribution on the interval of galactocentric distances from 4,000 to 16,000 pc as such the presence of three areas, each of which was described by its own gradient and mean abundance values, as well as to prove the existence of a certain gap in the distribution at the galactocenric distance of 11,000 pc.

The fact that homogeneous estimations of the chemical compositions are obtained for more than 600 stars is an unprecedented result. The Na, Al, Cu, Zn, Y, Zr, Ba (under the non-LTE approximation), La, C, Nd, Sm and Eu behaviour in stars that belong to the thick and thin Galactic discs and the Hercules stream was defined and investigated. For the first time it was shown that a larger distribution of the neutron-capture elements’ behaviour comparing to that one of alpha-elements is associated with secondary production of those elements and the absence of correlation between metallicity and age of the thin disc stars. And for the first time it was suggested that variations in the nickel abundance with metallicities higher than the solar ones can result from the dependence of the output of unstable nickel isotope 56Ni that is the main source of iron on the metallicity. For the first time the abundances of eight neutron-capture elements were determined for five stars in the metallicity range -0.8<[Fe/H]<-3 by the advanced list of spectral lines obtained with the 1.93 m telescope at Observatoire de Haute-Provence (OHP, France) equipped with the SOPHIE echelle spectrograph.

The scenario of the lithium production was suggested for some stellar systems at the evolutionary stages when one of the components is a young neutron star (NS). In such systems the source of lithium is a result of the optical star surface irradiation by high-energy particles accelerated to relativistic speeds in the inner part of the disc around a NS.

Three-dimensional hydro-dynamical simulations of accretion discs, their precession and stellar winds are developed for close binary systems and on the basis of proper worked out models. The three-dimensional hydro-dynamic interchange of matter in the β Lyr system was computed accounting for the stellar wind from the mass donor. The computations showed that an optically and geometrically thick envelope is formed around the accretor due to interaction of the matter flowing from the Langrangian point L1 and the accretor’s wind. The wind flows freely at the centre of the disc over the accretor’s poles. Jet-like structures are produced beyond the wind-propagation region over the thick accretion disc. The matter flowing from the outer boundary of the disc interacts with the donor star’s wind that results in formation of stationary shock wave in the region between the Langrangian point L1 and the outer boundary of the disc towards orbital phase 0.25, and that can cause the X-ray emission from the β Lyr system.

The conditions of formation of proto-planetary objects, such as broad configurations of the Earth-like, Jupiter-like objects and those like Kuiper Belt objects were defined.

The dependencies of the effective temperature, surface gravity, microturbulent velocity and atmospheric iron abundance variations on the pulsation phase were developed for a few tens of Cepheids.

A new kind of inflation called a bouncing inflation that opens up new possibilities to describe the Universe’s early evolutionary stages is characterised in the studies in cosmology, which is a relatively young research line in our school of thought, by the example of a nonlinear gravitational model that simultaneously consider quadratic and quartic nonlinearities. The weak field boundary in nonlinear f(R) gravitational models is investigated; the metric perturbation is examined, and the conditions under which these models meet the requirements of the gravitation test are defined. The first- and second-order corrections for the metric coefficients in multidimensional Kaluza-Klein models with different types of compactifications are determined, and the experimantal constraints on these models are found. Mutual dynamics of the Milky Way and the Great Andromeda Galaxy is described, as well as the formation of the Hubble flow in the vicinity of the Local Group.

The activities on accumulation of positional and photometric observations of asteroids and meteors were proceeded with telescope OMT-80, meteor patrol based on a Schmidt telescope and different short-focal-length cameras. Observing station located in Snake Island joins simultaneous meteor observations every year.

In 2009-2012, RSI AO OSU conducted a series of research projects under international agreements, such as Abundances of Light and Neutron-Capture Elements in Atmospheres of Globular Cluster Giants as Testing of a Star’s and Globular Clusters’ Evolution (Lithuania); Astrometry and Photometry of the Near-Earth Objects (China) and Photometry for Efficient Study of Interaction Between Planets and Their Satellites in the Solar System (Vietnam).

Research papers
by members of SRI Astronomical Observatory of Odessa I. I. Mechnikov National University
published in 2020-2016: