Between families scientists, who gathered and defined plants, which are in herbarium, there are many glorious names. There are more than 500 families between herbarium collectors.

Scientists, who worked in XIX century

In North-West Black Sea shore he took part in many expeditions to river Prut’ valley, to island Zmeinyi, in Reny, Izmail, Nerubayskoe, also was in Crimea, Hercinia, Germany etc. Just his collections were the base of university herbarium. Ch. Steven called by his name one from species of abies.

Nikolay Konstantinovich Sredinskiy (1843-1907) worked in the department of botany of Novorossiyskiy University in 1871-1874. His floristic investigations were devoted to Novorossian land and Bessarabia. He described mushrooms, water-plants, vascular plants, indicated detailed description of sand part of Dniester estuary. His collection indicated more than 500 herbarium lists. After taking the magistrant’ examination he was carried away by investigating of railway flora and in future it became his life. 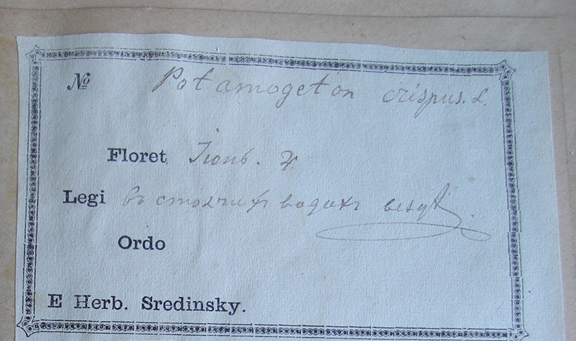 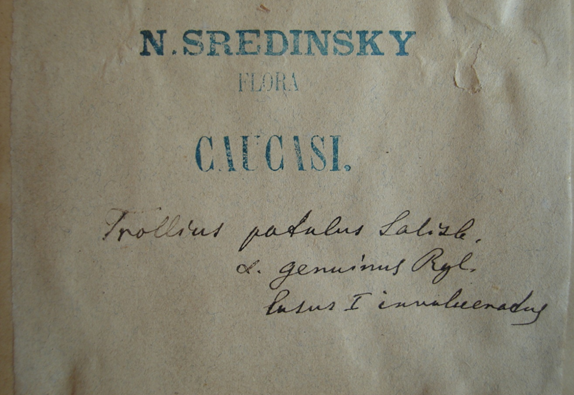 Petr Stepanovich Shesterikov (1859-1929) has not high education, but he was real naturalist – investigator, who prepared and printed first in Russia determinant of Odessa’ flora, in which were indicated 1180 species from 497 genus and 91 families (Barbarich,1984; Shesterikov, 1912). During many years, he was responsible secretary of Novorossian society of naturalists. P.S. described more than 660 species of flower plants with indicating of collection’ places, dates of flowering, local names and synonyms. 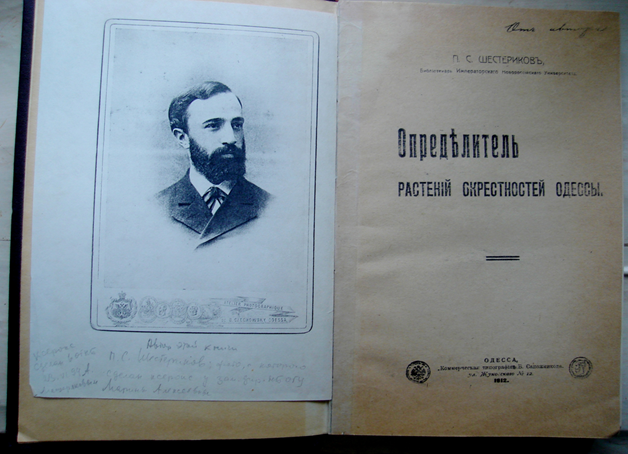 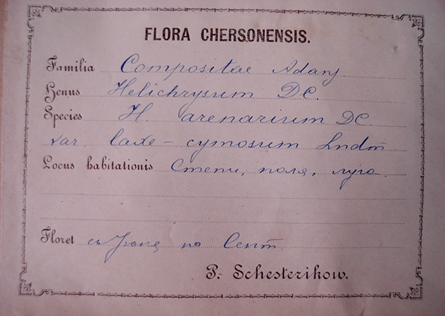 Laureate of State Premium of USSR (1946). Honorary Member of the National Geographic Society of the United States.

From 1903 learned in Novorossiyskiy (Odessa) University, which graduated in 1908 with diploma of first degree.

After university he worked in expeditions in Oksko-Angara territory, in Siberia, Japan. Collections of that time are in herbarium. 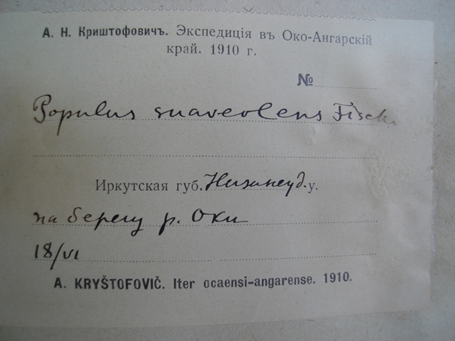 Label of A. N. Krishtofovich 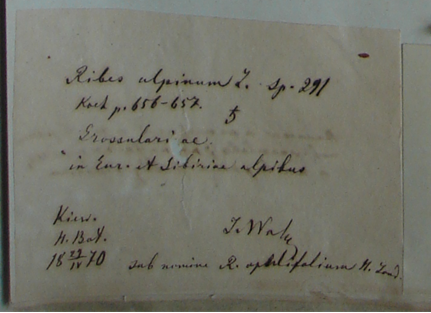 Lyudvig Adal'bertovich Rishavi (1851-1915), pupil of I.G. Borschow, head of botany cathedra of Novorossiyskiy University in 1885-1893. Six years he worked as conservator of botanical study, which in 1893 he divided to botanical study (herbarium) and botanical laboratory. In that period in botanical study worked S.M. Pereyaslavtseva (in flora of Black Sea water plants), N.M. Albov (in flora of West Caucasian), N.M. Zelenetskіy (in flora of Crimea and South Russia), A.M. Pogorelskiу (in flora of Cherson district), N.L. Okinshevich (in Bessarabia dendroflora).

Nikolay Mihaylovich Zeleneckiy (1859-1923) – head of cathedra morphology and systematic of plants in 1920-1923, head of botanical garden in 1920-1921. He graduated the Novorossiyskiy University as candidate of nature science.

Boleslav Boleslavovich Hrineveckiy (1875-1963), head of botany cathedra in hard years after First World War. He investigated here the flora and vegetation of Caucasus, Poland, Lithuania and so investigated stomata, where his work became classical. Next he became member of Poland AS, founder and first head of Poland Botanical Society and League of nature protection.

Georgiy Andreevich Borovikov (1881-1958) – graduated student of Novorossiyskiy University with first degree diploma, in future doctor of science, professor. His main works are connected with plant physiology, but with his attention were connected problems of systematic of plants and geobotany: ferns of Cuban region, soil and botanical division into districts East Siberia district, which were unknown that time

Vera Fedorovna Pasternackaya (1886 - 1945) after the graduating of Odessa High Women Pedagogical Courses’ nature faculty worked as docent of university with N.M. Zelenetskyi, which in that time was a head of botany cathedra. Then she became professor, head of botany cathedra in Pharmaceutical Institute. In 1930 she goes to Samara, where she work as professor of botany. On the basis of her investigation she publicized 24 work, between which “From Krasnaya polyana to pereval Pseashcho”, “Botaniko-geographycheskoe obsledovanye v dolyne rechki Lashipse v Abhazii”, “Phyto-phenologycheskie nablyudenija v okrestnostjach Odessy za desjatyletie s 1916-1926”. There are in herbarium her collections from different parts of Crimea, Caucasus, Blsck Sea shore.

Filipp Efremovich Kulik (1898 -) firstly student, than aspirant (1934-1937) of university, who during doing his dissertation work “Pryrodnye kormovye ugodja Razdelnyanskogo raiona Odesskoy oblasti” gathered interesting herbarium, which take possibility to comparison it with modern flora of this region.
Lidiya Dometianovna Bassarskaya (1890-1955) – assistant of morphology and systematic cathedra of biological faculty in 1920-1923, then during 7 years – assistant of Odessa High Women Pedagogical Courses, then docent of Voroneg’ veterinary institute and worker of quarantine station. She investigated plants with great attention, with great responsibility collect and work out herbarium collections, mount them.

In history of biology he is famous as paleobotanists and botanists, who know Kazachstan flora, head of Middle-Asian herbarium in Botanical Institute.

Karl Fridrih Ledebur (Ledebour) (1785-1851) – famous German botanist, who in 1805-1836 was at first the director of botanical garden in Derpt and then professor of Derpt’ University. Author of first critical summary about flora of Russia vascular plants.

In 1833 took part in expedition to Siberia, investigated the environments of Cherson, flora of Crimea and Caucasus.

Villibal'd Gotlibovich Besser (Besser)  (1784-1842) – member-correspondent of Peterburg’ AS. Investigated flora and made the herbarium collections of Right-bank and West regions of Ukraine. Hew teach in Kremenetz’ lyceum and then in 1835-1838 was a botany professor in Kiev’ university. He had 43 scientific works. In herbarium there are his collections from Odessa, Cherson, Kishinev, Elysavetgrad, Kremenetz etc. Though on the labels not always there are dates of plants’ collection, it may be proposed, that plants were gathered to 1822, when were published “Enumeratio plantarum…”
Emanuil Lindemann (1795-1845) – the founder of Sankt-Petersburg University’ herbarium in 1814-1832.

Eduard Emmanuilovich Lindemann (Lindemann) (1825-1900) – war doctor by profession. He was famous botanists, who 53 years of his life investigated plants. He learned flora of 29 districts of Europe’ Russia: from Curland and Petersburg to Cherson and Bessarabia, including 5 district of Poland’ Rein. Firstly (1867) prepared description of region’ flora of Elisavetgrad, addition to which were in 1868, 1872, 1875. In his classical work «Prodromus Florae Chersonensis» (1872) were 1329 species of vascular plants and more than 700 forms, to which were indicated place of life, time of flowering and fruiting, there were synonyms. Just Novorossiyskiy University in 1877 gave him degree of botany’ doctor honoris causa, and Novorossian society of naturalists in 1855 elected him by honorable member. The part (duplicates) of Sankt-Petersburg university’ herbarium, which was founded by his father, he enlarged to 62 thousand of herbarium lists and gave them to Novorossiyskiy University for, as he said, to take their part of public benefit to young people, who learn in university. In this herbarium, there are many collections of another collectors: more then 400 families. 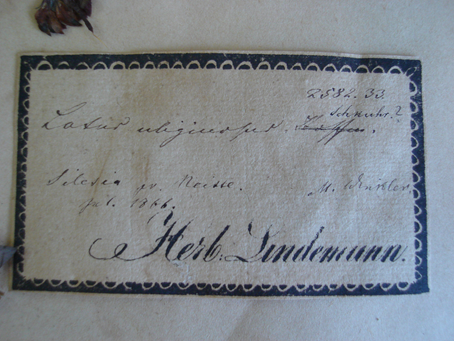 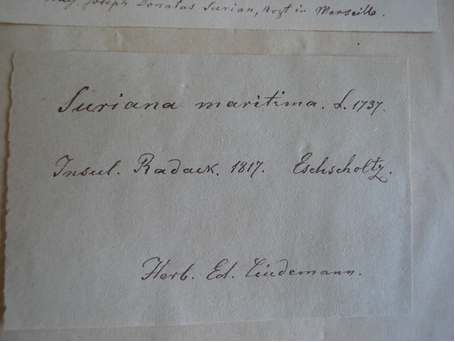 In herbarium there are collections of many famous foreign scientists.

L. Rabenhorst (1806-1881) was famous collector, whose herbariums of lichens, water plants, flower plants were bought by Novorossiyskiy University. There are his own collections from Martynika and other places.

P'er Edmon Buas'e (1810-1885) – Switzerland’ botanists, who described six thousands species of new flower plants. He was the author of “East flora”, five volumes of which were published during his life and sixth – after his death, where indicated geography diffusion of 11876 species of plants. In herbarium there are his collections from 1865.

Fedor Kondratovich Bibershteyn (Marshal fon Bibershteyn, M. f. Bieberstein) (1768-1826) – famous botanists, whose work was connected with Charkov’ University. He carefulness during many years investigated flora of Crimea and Caucasus. For Crimea’ flora he indicated 1280 species of plants. Main results of his work are in three volumes of «Flora Taurico-Caucasica» (1808-1819). His name have some species of plants/ He was the author of many species names of vascular plants of Flack Sea shore. In herbarium, there are his collection from Caucasus.

Famous florist and mycologist. In herbarium there are his collections 1856 year from Charkov. 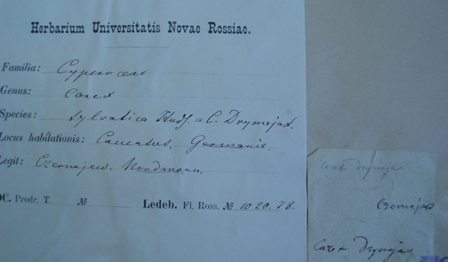 In herbarium there is wide geography of his collection: from Odessa to Crimea, Caucasus. Siberia, outskirts of Moscow.

Afanasiy Semenovich Rogovich (1812-1878) – famous botanists and paleontologist, from 1853 – professor of Kiev university and in that time director of botanical garden. His scientific interests included floristic, systems of plants, paleontology. Near 20 years he learned the flora of Poltava, Chernigov, Kiev, Podol, Nolyn districts. His herbarium has 1469 species from 547 genus and 92 families. In herbarium there are his collections from Kiev, Chernigov, Crimea’ territory. 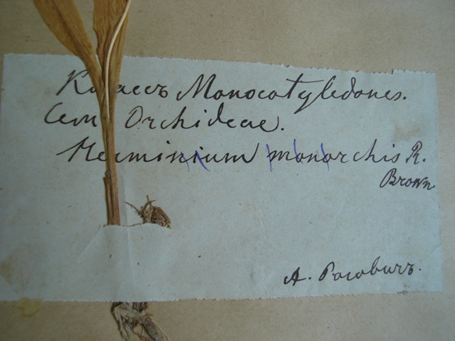 Label of A. S. Rogovich

Ivan Yakovlevich Akinfiev (1851-1919) – teacher from gymnasium in Ekaterinoslav and Aleksandrovsk (now Zaporozhye), who more then 40 years learned the flora and vegetation of South of Ukraine and Caucasus. For Ekaterinoslav he indicated 936 species of plants, for Bolgrad – 550. His learner was famous florist A.A. Grossgeim. In herbarium there are collections of I.A. Akinfiev 1866-1889 from Kislovodsk and Ekaterinoslav.

Iosef Konradovich Paczoskiy (1864-1942) – Famous polish botanists and zoologist, who in 1897-1920 was the director of natural-historical museum in Cherson, professor of botany of Cherson polytechnic institute, then professor of Poznan university.

He was one from active member Kiev and Novorossian societies of nature investigators. He interested by floristic, systems and geography of plants.

He investigated the flora of South, South-East and South-West of Russia.

He wrote more than 70 fundamental work about Ukraine’ flora. He was one from the first, who described associations of South-Russian steppes, was the author of first text-book of Phytocenology.

His name have some species of plants. In historical herbarium there is  nominal collection of I.K. Paczoskiy 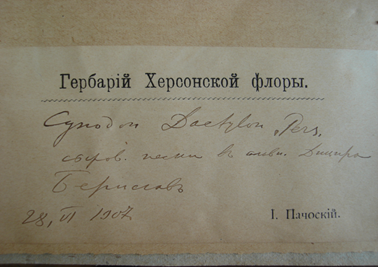 In 1887 ended Kiev University, where he became scientist under the leadership of prof. I. F. Schmalhausen.

In 1894-1917 worked in Main Botanical garden of Petersburg as conservator of herbarium, main botanist, and head of department of live plants. That time he had many voyages, get to know the flora, work of herbariums and botanical gardens. He was on the all continents, beside Australia and Antarctica.

From Russian geography society he has premium by Przhevalskyі. From 1917 he worked in Ukraine, take active part in creation of AS, where he was as president in 1922-1928. In 1928-1933 he worked as director of botanical garden in Odessa and then because he didn’t want to support views of T.D. Lysenko – to end of life work as scientific consultant of this garden. 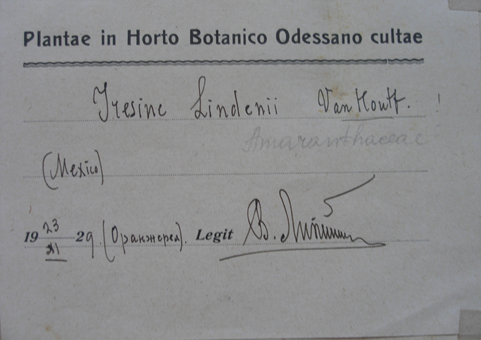 Label of V. I. Lipskiy

On the basis of his investigations he described four new genus: Korschinskia, Galagania, Koslovia, Ladyginia, 220 species of plants, 45 from them have his name. Besides this his name have two genus: Lipskia Nevski (Apiaceae) and Lipskyella Jus. (Asteraceae). One from the first V.I. scientifically described floras of Indonesia, Tunis, Middle Asia. He investigated water plants of Black Sea, much attention gave to Phyllophora. Based on his investigations there were built iodine and agar factories in Odessa. That time iodine and agar supplied from boundary. Herbarium collections of V.I. Lipskiy there are in Institute of Botany in Kiev, in Crimea, in Odessa, in Russia.